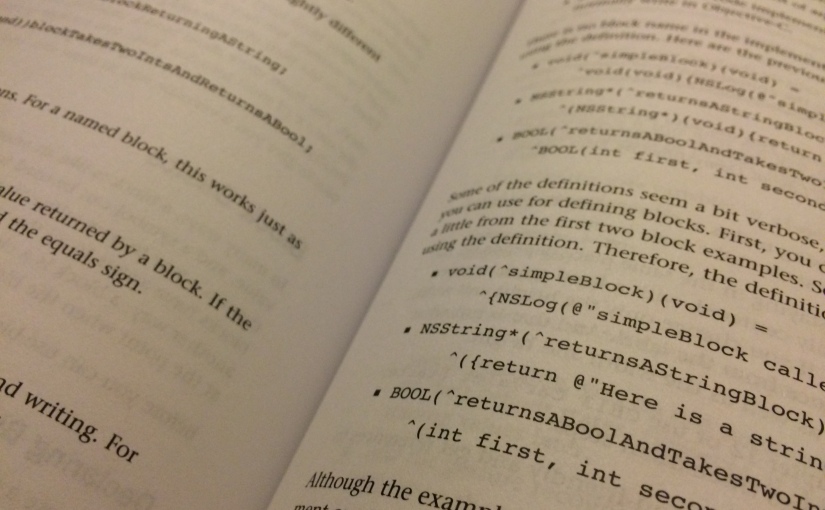 Recently, there was a question about blocks that I couldn’t answer so I took a note to review it.

I came upon some great articles. Seeing the same elephant described by different people invariably leads to a comprehensive understanding of the elephant (much in the same way that taking beginner swing dance classes from 4-5 people leads to better fundamentals).

With no desire to write an inferior blog post, I’m going to review the ones I found, much the same way that I review restaurants.

I’ll be looking at:

Which should I read first?

Starting from Square One

Go with Tutsplus: Objective-C Succinctly: Blocks. It’s short, has useful examples and memory is well explained with diagrams. It stops short of retain loops though, which is a vital topic. Also lacking is why blocks are used (when would I want to use a block? what would I have used otherwise?).

AppCoda (Introduction to Objective-C Blocks) is really known for their app tutorials. They explain very well why you would use blocks and lead you through an example of how it would be used in a practical situation with an actual app.

For Programmers from Other Languages

Matt Nunogawa (Objective C Blocks: Summary, Syntax & Best Practices) writes his blog directed at programmers from other languages and overviews blocks with greater examples for retain cycles and how to avoid them.

Bonus: Conrad Stoll (Blocks, Operations, and Retain Cycles) writes about a real example of a bug that his team faced with retain cycles and blocks.

For Quick Reference After Learning It Once

Apple Working with Blocks documentation can be a bit dry and doesn’t give much guidance for when to use it, but if that doesn’t bother you, then by all means go ahead. It’s very comprehensive.

I was asked whether a person with no iOS experience should learn Swift or Objective-C. After talking to a few people at the school, I’ve come to a simple conclusion.

Some Observations about Swift

In a couple days of playing with Swift, I’ve noticed that I could pick it up pretty easily. The frameworks are the same, but there’s some cool new syntax that will save a lot of typing (closures come to mind). I’ve also found that similar to learning Spanish and French at the same time, learning Swift will confuse your Objective-C syntax.

For professional iOS developers, most companies are still in Objective-C and you will be expected to read and write it. Simple as that.

Especially if you’re working on iOS development on the side, by the time you’re familiar enough with iOS frameworks, Swift will be more mature, more usable by then.

This week we started our client projects. 19 people broke down into teams of 4 or 5. There were four clients and our team had four people. This was the first time that I really needed to deal with git merge conflicts and develop a workflow.

It wasn’t long before I had a conflict.

There were three files that I conflicts with:

I knew how to resolve the first one, but as I tried to do that, my file directory on the left side of Xcode disappeared. It was time to ask for help. Zach, one of our TAs, helped me put together a plan to resolve the conflicts.

I had to back out of the merge, so I used

and then reset the head to the last commit because there some uncommit changes that I didn’t want anymore.

Apparently that file directory is stored in the .pbxproj file. The way that we resolved this was by telling git to just join the two versions together in the .gitattributes file by adding:

Another way to resolve this is to choose one version of the pbxproj.

Replace “ours” with “theirs” to get the version being merged into the current branch.

I had to add in some files that were no longer referenced by the pbxproj file after the merge using this second method.

For the .xccheckout file, this was a file that should have been ignored. I added this to the .gitignore file.

The problem was that both versions that I was trying to merge still had this file in tracked files. I had to remove this file from both repos by running:

Once the .xccheckout file was removed, I could merge the two repos.

Both the .gitignore and .gitattributes files should be set up at the beginning of a project.

Question: Should I be using frame or constraints to draw views in iOS?

Answer: Constraints. Autolayout will be able to adjust to the four different screen sizes, so you don’t have to. It’s like the CSS of iOS.

Question: I know how to animate the background color of a UIView from black to red with animateWithDuration … What do I use when I want to make it go from black to blue to red?

Answer: I could use two animations with different durations, or key frame animations.

Question: One of the labs this week was making a game with four draggable images. After finishing the lab, I noticed that I could drag multiple images at a time and that they would collapse to one location at the end of the drag, because I had only accounted for one object. How can I make it so that the user can only drag one object at a time?

Answer: One solution I found online used one gesture recognizer in the superview and detected which object was pressed using hitTest:. However, this did not solve my problem. I could still take the two. This question is still open, but I can imagine a solution where I store the locations of a four objects in an array and update it as I change each object’s location.

Mistake: Making one recognizer and assigning it to four objects.

Each gesture recognizer can only have one owner and each assignment meant that it was just being reassigned to the latest view.

Lesson: Make one gesture recognizer for each object.

Symptom: Constraints were not working.

Mistake: I had assigned constraints to the view.

Symptom: My game’s win conditions were being satisfied when they shouldn’t have been.

Mistake: When comparing the two views’ centers, I checked if the difference was less than a threshold, when I meant to use the absolute value of the difference.

Lesson: Unexpected wins are bugs too. They should be understood as much as bad bugs.

Symptom: My autolayout had more constraints than I thought I had specified.

Mistake: To deal with the iPhone size plus, I had constraints for when trait collections display scale were 3, but had forgotten to wrap the other constraints in an else statement.

Lesson: Those willTransitionToTraitCollection:withTraitCollection: methods can get really complicated and I have to be careful with the large if statements.

The central part of Tinder’s design is the swiping mechanism. The feature allows people to focus on one match at a time and make a decision before moving on to the next match.  Good for spending more time on matches and good for reducing the speed of data consumption.

I wanted to learn about animations, so this weekend I hacked together a prototype of the feature.

All the code can be found here along with a video demo. The code is very dirty, but that’s topic for another week.

The next step in my TinderClone project is to make the swipeable images. Richard Kim has a really cool blog entry about how to make this feature three different ways. Since I’m taking on this project to learn to code, I took the “build it from scratch” way and tried to follow Nimrod Gutman’s blog. I totally failed. Twice.

It turns out that I didn’t really understand how UIView and UIImageViews worked. So, I decided to play around with them.

Step 2. Read up on UIViews

I read thought through the Apple View Programming Guide. in particular, the view and window architecture. I didn’t really understand bounds very well, so I started an Xcode project called playingWithBounds, that ended up being my project.

Step 3. Playing around with the UIView properties

I made single view project where I drew boxes and changed the bounds, and so on to see what would happen.

Step 4. Playing around with CGAffineTranform

When I got to Coordinate System Transformations, I started playing around with rotating and moving boxes.

I made a slider to rotate an UIImageView.

Where other solutions mentioned at the top used UIGestureRecognizers, I imagined that these event handling methods could move my picture around too. They used UITouch objects.

I was touching my UIImageView and nothing was happening. Googling around, I found that UIImageViews are not user interactive by default. So, I had to set it.

I also set the

I didn’t know, so I built the first three methods and NSLogged the touch and event objects. They were very descriptive.

UITouch has a lot of really useful info:

I now had the velocity of touches and I just needed to update the view being touched with a new center value to move it.

That was the key to solving the problem.

I added the other Tinder style animations associated with swiping. All of these were based on using the x location of the touch divided by the width of the phone to calculate a factor that would modify the rotation of the image and the opacity of the overlaps.

The other options such as UIViewContentModeTop maintain the size of the image, and align the listed edge to the corresponding edge in the box. For example,

For the touchesEnded method, I wanted to animate the image moving back into location.

Step 8. Animation for the picture flying off the screen or springing back

To animate the picture flying off to the side, I set a swipe threshold of 30% of the width.

Boy, I learned a lot by just reading the documentation and Googling. That was fun!

Blogging is an intentional investment in time

One reason I blog is to review what I’d learned that week.

The other goal in this blog is to document my creative process. There are two styles of documenting process.

Both have their benefits and drawbacks.

This weekend, I spent more time coding the Tinder swipe feature and didn’t have as much time to blog. I wanted to finish. I found that trying to recreate my process of discovery after the fact was time consuming and demotivating. Perhaps that’s not a good strategy. If I haven’t been taking notes along the way, I should just provide a summary of key points.

Answer: Both are the same if the array is already made. Stylistically, prefer the latter.

Answer: No, if you want to maintain order, add an attribute like createdAt and use an NSSortDescriptor to order by created time.

Symptom: The search functionality works most of the time but in a small set of users, the search results are empty.

Mistake: Sending an API call in the prepareForSegue method.

This is called a race condition and it’s a very annoying problem to fix because it’s hard to detect and I would have to have millions of users like Facebook to have this problem.

Symptom: I was trying to test a tableViewController to make sure that it worked with Core Data by adding 3 test objects: @”Test”, @”Test Test”, and @”Test Test Test”. I was only seeing one of the three items repeated three times.

Mistake: Messing up basics when moving on to more advanced topics.

Lesson: Watch for simple mistakes, when something is not working as expected.

I tried for the longest time to click the back button, but I couldn’t reference it using an accessibilityLabel. I found that you need the navigation controller to pop the top view controller.

In the it block:

To get the navigation controller add these lines

Between the first describe statement and the beforeAll block: