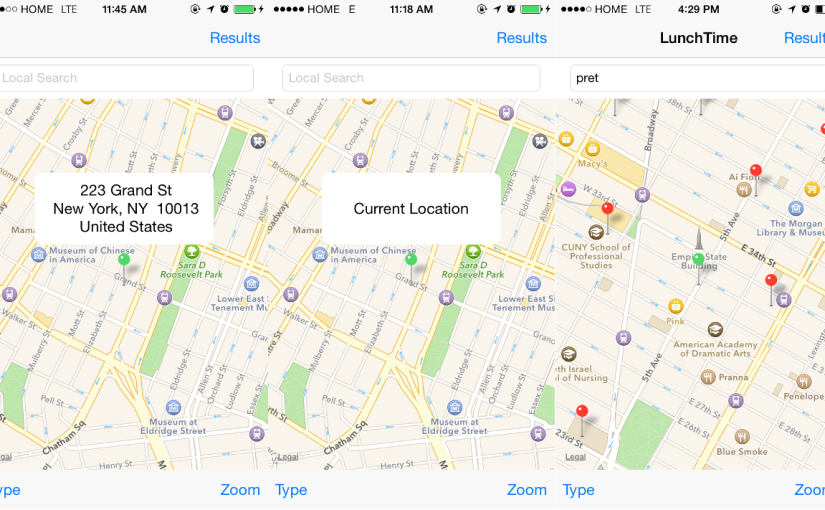 As the functionality and the look was coming into place, I took note of bugs that I saw.

The most insidious bugs are ones that don’t happen all the time or under conditions (ex. when internet is especially slow or the computer is especially fast). One example is the race condition.

What is a Race Condition?

A race condition is a situation when the sequence of asynchronous responses results in an undesired effect.

This led me to believe that I had a race condition.

Usually the internet is fast enough that the reverseGeocoding response returns before the user location dot is tapped.

The two things that are racing are

One way to fix this is to update the label when the reverseGeocoding network call came back.

At the end of the completion block, I added a method call to updatePinCallout, which pretends that the user location dot was tapped again and reloads the address.

Just remember to use the mainQueue to retap the dot or else the address won’t update on screen.

This change also fixed another bug that happened when the user location would jump when WIFI was enabled and the address label would not update to the new address.

When I first implemented zooming to fit destinations, I only zoomed when the location was outside of the visible region. I realized that sometimes this would not be sufficient because sometimes the map would be zoomed way out, so I decided to account for that scenario too. I would zoom in if the destination was in the original visible area. This got complicated quickly.

Eventually, I realized that it was too much and just made it always zoom to the destination. The code went from 14 lines to 1.

I thought I was done with the project. Wrong. A few days later, I was trying out the app on the bus and came across two bugs.

Riding a Bus, trying to Find a Pret, but being snapped back to the bus whenever the location updated

Thanks a lot. That’s really useful. Which Pret???

As the Pragmatic Programmer said:

“Test your software, or your users will.”

There’s certainly a lot of ways this can go. Add friends, add Facebook integration, add Yelp results, use Google Maps. That would be fun to do, but would lack direction.

For a product to be real, it must have a real use.

The way that this app fits into my life has something to do with lunch (ergo the name LunchTime). In an effort to build good habits, one of them is to walk 10K steps a day. As I’ve discovered, this means walking 1.3 hours a day. If I don’t plan to walk, I won’t get near 10K.

So over lunch, I like to walk 10 to 15 minutes away and back. I think it would be cool to draw a diamond around your current location to see how far you can walk in 5 and 15 minutes and show how far each location is.

Options abound. Looking forward to the next expedition.

It’s been fun working with MapKit. Time to play around with something else. Who knows? I might be looking at WatchKit, EventKit, or something else entirely.